Required Reading: Tea in China, A Religious and Cultural History by James Benn 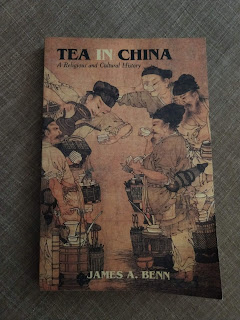 As drinkers of Chinese tea in the English-language sphere, our greatest lack is information. Tea in China, A Religious and Cultural History, brings a wealth of new information and analysis to the English-speaking tea-loving world.

First, though, I want to discuss the most common current sources of information about Chinese tea: vendors and their websites, tea forums, cultural news articles, and the very few English-language books that deal specifically with tea from China.

The first source, vendors and vendor websites, is a tricky one. While it's in a vendor's best interest to teach tea well, often that information is what they think their audience wants to know or hear. That usually amounts to a blend of fact, myth and opinion. True things like the birthplace of tea being Southwest China mix with opinions like "shu pu'er has no qi" and with myths like tea being discovered by Shennong ("divine farmer" a mythical Chinese sage king). These are further adulterated with factually incorrect statements like one I heard recently: a vendor from China giving a talk in Seattle stated that Hunan fu cha* is so special because golden flowers** only grow on fu cha. I nearly forgot to mention my biggest pet peeve: unsubstantiated vendor claims about tea and health, like those that made Rishi the subject of scrutiny by the United States Food and Drug Administration.

The second source, tea forums, are more a vector for opinion and community wisdom rather than fact. Any search of a tea forum will yield different "facts" about tea, but mostly these are opinions and beliefs masquerading as fact, often coming secondhand from vendors. Tea forums are excellent places to share information, like recommendations for vendors' teas and teaware, how to store tea and make tea, tea travel, etc. But, as with vendors, remain skeptical: fact and belief are often treated the same. Moreover, forum users become argumentative and hateful, and the longer a thread is, the more the chance of an argument happening converges on 1. I greatly benefited from forum users' opinions and information earlier in my tea journey, and I did meet good tea friends through forums. Either the arguments are more frequent or my tolerance is lower, and I avoid them now.

Cultural news articles are usually fluff pieces. Almost all of them have the same format: Jane or John Doe vendor walks us through the (five, only five!) different kind of teas made from Camellia sinensis, what they're "good for" (i.e., nonsense health claims), how to brew them, what food they pair with (couching tea in western gastronomy is a common theme in these articles), some cursory information about tea's "history" and maybe some few words about teaware. Occasionally there are in-depth vendor profiles, and these have more utility. Quite less frequently appears a piece on tea tourism; newspapers and magazines in the US and Europe aren't clamoring to spend money to send their reporters to Asia to report on tea farms. So, some useful information, some not, and a fair amount of nonsense.

There are a handful of literary works on Chinese tea in English. These are of two varieties: translated works from Chinese/Taiwanese authors and those written by westerners. The most famous of the former is, of course, Lu Yu's Classic of Tea (Cha jing), written in the Tang dynasty, which deals with tea of the time, which most of us wouldn't recognize because no one makes tea that way now. Other works, such as those from the Wuxing publishing house in Taiwan, were written by nonacademic authors and don't often contain the hallmarks of what westerners would consider good scholarship: citing sources, source analysis, looking for agreement or disagreement among sources, etc. They are still quite useful, but they contain a fair amount of wisdom and opinion presented (unsubstantiated) as fact. As far as books by westerners, we have books like The True History of Tea by Erling Hoh and Victor Mair, a laudable historical overview of tea and tea trade, in terms of scholarship. The Story of Tea, A Cultural History and Drinking Guide by Mary Lou and Robert J. Heiss, gives a useful bibliography, even if its coverage of tea's origins is too loosely treated. It's more of a reference manual for the types of tea, where they're grown, how to brew them, etc. In fact, that's what a lot of tea books in English look like: tea 101, the very basics. Of these that I've read, though, the Heiss's work does the most thoughtful and thorough job, nearly 400 pages of information.

If you want to go deeper than tea 101--and you don't read Chinese--I recommend James A. Benn's Tea in China. Benn begins by defining his terms and the scope of his work as a primarily religious and cultural analysis of tea. He then analyzes, rather than merely repeats, claims about the origins of tea found in popular belief and, specifically, in Lu Yu's Cha jing. He gives detail about the characters used and what scholars believe they affirmatively know about those terms. The work allows for ambiguity to stand where there is no clarity in available sources. It makes few assumptions. And it exhaustively cites its sources, comments on them when appropriate, and refers the reader to additional information on sometimes even highly niche topics.

Much of the book discusses tea in the Tang and Song dynasties, with a chapter on the Ming. In these he explores the invention of tea as a religious, cultural and medical phenomenon, exploring its connection to Buddhist and Taoist literature and practice, and more extensively, its appearance in poetry and painting.

Perhaps this was the most exciting part about this book for me, the translation into English of Chinese texts. It's difficult to find translations of tea works aside from the Cha jing, which isn't surprising. What's more surprising is how difficult it can be to find translations from some of China's most famous poets and historical personalities; that many thousands of years of literature means a huge backlog of works that we may never see in English (all the more reason to study Chinese, young tea drinkers!). Making this available, in one place, with analysis--the book is worth its price for this alone. If you're interested in Chinese tea poetry, I suggest you look up Steven Owyoung, who I found through this book.

What this book does not set out to do--and thus, doesn't--is research tea economy and trade, the use of tea in court and among the common folk, or anything not related to religion or art. He's left that for another author. Also, noticeably absent is information about tea in the Yuan dynasty. Many authors, in my experience, treat "conquest dynasties" like the Liao, Yuan and Qing as less "authentically" Chinese. I would have liked more information about Yuan dynasty tea and tea during the 5 dynasties/10 kingdoms period, assuming there are surviving relevant texts from that turbulent time.

I'm most appreciative of learning new things about tea in China, about its religious and cultural connections, and even some small facts, like that not all tea was compressed into cakes during the Tang and Song--one of those historical oversimplifications found in many tea books--that leaf tea was consumed, although it was also ground and prepared more or less like cake tea. Also, a little detail about Ming brewing: that tea leaves were rinsed with hot water in a strainer, then transferred to a pot, not rinsed in the pot like the gongfu popular today. The book filled in some finer details for me.

Tea in China, A Religious and Cultural History, if you'd like to purchase it, is available from the University of Hawaii press directly, as well as on Amazon. You can also ask your better local bookstore to order it.

*A type of hei cha, literally "black tea" but often translated now as "dark tea" to distinguish it from hong cha, which means "red tea" in Chinese but referred to as "black tea" in English

**jinhua, aka "golden flowers" is the common name for the fungus Aspergillus cristatus, purported to have medical benefits